The club has recently bought an Aleut 2 sea double which can be split into two shorter sections which fit in the canoe store, and are also a lot easier to load onto a car roof. In other respects it is pretty similar to the original club double, illustrated here, a North Shore Calypso II.

These are great boats for taking someone on an expedition which is a little beyond their current paddling standard, or make fantastic craft for two competent paddlers who get on very well - though no-one in a single kayak will be able to keep up. They are also great for wildlife - the aft paddler can stabilise and drive whilst the forward paddler takes photos. 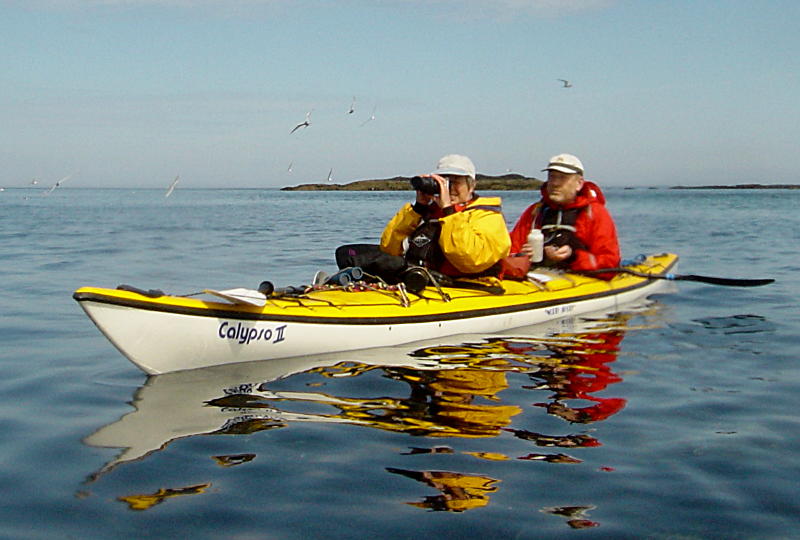 Being a very long boat, like most doubles, it has a rudder, though it is not necessary to use this if you are (both) confident doing leaned turns. The original Calypso II (as seen in the photos) had an unusual underslung rudder, which is why it may look a little different from most doubles you see (including the Aleut) which have a rudder which flips over from the aft deck. Club double on a day trip in the Summer Isles

Getting the trim right is important if paddling in windy conditions, especially if (as is often the case) you have a much lighter paddler in the front cockpit. A double will take a huge amount of kit, and it may be worth adding some disposable ballast (beaches have lots of wet sand you can bag up...) to help reduce the windage as well as adjust the trim.

The double is great for taking kids out.